To look at the logic of 66 books verse 73 books, we have to go back to the way we got the collection of books, we now call the Bible, in the first place.

This topic is geared toward Christians who deny the inspiration of the 7 Old Testament books found in the Catholic Bible that are not in most Protestant Bibles. Those books are as follows:

Not many of us Christians actually sit back and put ourselves in the times of the early church in regards to the development of the Bible. I’d like to do a little imaginative exercise to possibly draw out some clarity and to clear up some simple misconceptions that often never occur to us until we start to really meditate and think clearly about the logical progression of the development of the Bible as we have it today. 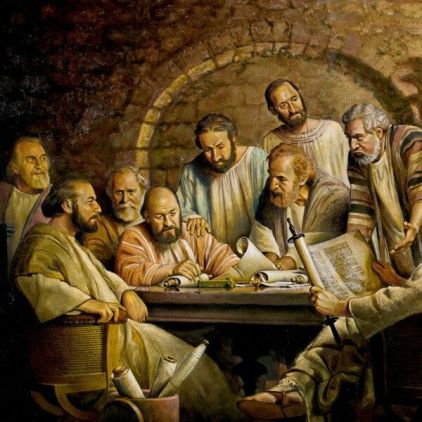 Think back to that apostolic generation when Paul was writing his letters to the churches of Philippi and Corinth, or to his writings to Timothy and Titus. What do you think it would have been like for him to be sharing his experience while he sits in prison, or travels across the land from city to city? Being a Pharisaic Jew I’m sure he knew the Old Testament writings very well, but what about the New Testament? At this point in his life he probably had not read any of the New Testament books we have today, many of which had not even been written yet, including some of his own!

As time goes by, more and more of these letters from Paul, the four gospels, and some other writings are gradually gaining popularity and being read at different places, sometimes in people homes, and sometimes in the Jewish Synagogues where many Christians were gathering together participating in the readings (mostly Old Testament at first and gradually growing to include the gospels and letters as time went on), and for the Breaking of the Bread (the body and blood of Jesus). Justin Martyr gives a clear account of this in his first Apology in 155AD:

“On Sunday we have a common assembly of all our members, whether they live in the city or the outlying districts. The recollections of the apostles or the writings of the prophets are read, as long as there is time. When the reader has finished, the president of the assembly speaks to us; he urges everyone to imitate the examples of virtue we have heard in the readings. Then we all stand up together and pray.

On the conclusion of our prayer, bread and wine and water are brought forward. The president offers prayers and gives thanks to the best of his ability, and the people give assent by saying, “Amen”. The eucharist is distributed, everyone present communicates, and the deacons take it to those who are absent.”

If you put yourself in that moment you would not be reading from a full collection of accepted books. You would be listening to a reading from the Prophets and the Recollections of the Apostles. It’s been just over 100 years since the Resurrection. The list of letters being written from location to location would differ based on availability. Word of mouth is how they communicated when they would meet on Sundays and where. I can just see the leaders gathering beforehand going through a bunch of scrolls that they have on hand and deciding which to read.

As more time goes on they begin to amass more and more followers and more copies of the gospels and the Old Testament writings, but still not having a universal collection to go by. At the same time you have many people teaching different theologies and the only defense against these uprisings is for the Bishops to gather and discuss, not only possible false teachings being spread, but also which letters were to be read or discarded from the readings at these gatherings.

Without a single recognizable Church to combat and proclaim heretical teachings, Christianity would have been splintered into many contradictory sects. How would any Christian of the 4th or 5th century know that they were following the correct teachings of Christ unless there was a meeting of Bishops (successors of the Apostles) who everyone could rely on for correctly passing on the true teachings of Christ. Without that One Single Church Hierarchy, we would have no way to distinguish between true and false doctrine. If the Bishops of the Church were simply another interpretation of true Christianity, then it follows that no argument can be made to accept one doctrinal teaching over the other. If that’s the case, then the True Church of Christ can never be known since none of those other movement can produce an authoritative argument for their doctrine of Christ. This all occurs prior to there even being an established authoritative collection of books known as the Bible!

It is in fact one of the debates raised by the self proclaimed Christ followers.

So now we go one step further and we see that there was one Church that met together in 397ad at the Council of Carthage to discuss which books would be recognized as inspired books and those books are put into a single collection or list, and was then passed on to all the Churches. The important thing to note here is the setting in which this took place. This was an Official meeting of the Church. If you were a Christian of the true faith of Christ, you were either in the room or awaiting any proclamation that came from this meeting. If you did not follow the teachings from this council, you were not in communion with the True Church of Christ. There were many of these people, including the Arians who were often Bishops themselves and would have also been present at this council. The importance of this observation is that it has always been possible to have heretics and false teachers inside the Church. It’s also important to note that there was still just One Church, and that Church had authority over all Christians.

The problem here for many Christian is that they are inconsistent with their beliefs when they follow a set of beliefs that are contrary to that of this One Church of the early centuries and thereby place themselves in the same boat as the heretics who deny certain aspects of Church teaching while accepting the parts that they determine to be true according to their own personal beliefs. Back then they followed a person who made a convincing argument or had a charismatic personality. Today people do the same, but then they add to it their interpretation of a Bible that lacks 7 books simply because of faulty preaching and the timely invention of the printing press, allowing for millions of Bibles to be printed without the entire Old Testament collection of books listed at the Council of Carthage in 397AD and instructed to be read at all the Christian Churches of the time.

If you say that the Catholic Church was simply acknowledging the books that were already received as inspired by the Christian faithful, then I see two problems;

1. Why then was there a Church council to officially pronounce to all of the churches that these are the inspired books?

2. If you say they were simply acknowledging the sacred letters, then how can you reject the 7 books in the Old Testament that were also included in the list of inspired books? It would certainly follow that the majority of Christians, both in the early Church and even today still hold these books to be inspired. The question is, why don’t you?

I believe that it is because most of us don’t take the time to follow through with the logic of the matter. We are more comfortable believing what a pastor, friend, or relative told us was true and simply accepted it that way.

Most of us will never sit quietly and contemplate the questions like;

Why do I accept the book of Revelation as inspired scripture?

Why do I accept the book of Esther as inspired scripture?

How did the Bible end up with a set number of books?

Why should I trust the Bible at all?

If the Catholic Church of the 4th Century proclaimed the Old Testament books then how can I trust them in their proclamation of the New Testament?

Sex Abuse and the Church

3 Reasons to Know Your Faith

Aren’t All Churches the Same?

Handmaid of the Lord

Did Jesus Have Brothers?

The Life of Pope Francis